Sitting in a saucer waiting area, in an airport. Las Vegas no doubt.\r\nRoom looks like some ancient(1970s) religious temple with an array of slot machines in the center, the focus, the altar. Like a spacecraft lounge belonging to race of converted Baptist aliens. In this state of near sleep, I half believe the room may take off itself, putting the control tower into a frenzy and abducting a catch of red-eyed humans. Hip hop beats into my left ear, the right earphone dead. It muffles the ping-ponging and chin-changing of the slot sluts. I don”t give money to beggars but I gave freely to a nickel and a quarter machine I thought I had drawn a dime on. That was then, now I”m remembering the Taco Bell burritos I ate as I drop a bomb and the area clears. Security sniffs around. I watch the peoples. The Jamaican being questioned about contraband by undercovers. The woman crying about a missed flight at the passenger service desk. At the stone face of an attendant as I ask to speak to her supervisor and again as I ask to speak to her supervisor”s supervisor. After drama and debate, my compensation received for an employee”s incompetence, I again look at her face. Still stone. She”s been working here long. There”s a man, dirty jeans, wanderer, not waiting for anyone or anything, just waiting for something to come around. I think about my father and feel sad, no something else. I”m not sure. He”s as distant here as when he”s right in front of me. Man who is frustrated with me, disapproves, man who questions, doubts, worries, man who analyzes my jokes, man with a mustache, man with good intentions, man who loves me in his own dimension. I find myself confused, about him and everything I used to believe in, tired, with trying to bring him around. The rug has burgundy, violet, and poop yellow polka dots floating in a sea of dirty-car-window-sky-blue. It looks back at me and says, wear more Velour. There”s a maintenance man. He has a mustache. There”s a pilot. His mustache is trimmed. I think of Leigh for a second. She comes to my thoughts uncontrollably like a beat comes to a heart or a burp comes to a mouth. I don”t know what to think so I stop. A mother and daughter team are playing my nickel slut. Both in unfashionable saggy jeans, white sneaks that don”t look too old but don”t look new. The mother with curls the younger one in dirty blond straights. I wait. A man in a nondescript suit paces. I think of tract housing. The change girl with paper thin curls tells me to buy a five-spot quarter roll when I ask for two in quarters. You”ll just be back. She thought she knew me like a dealer knows his junkies. I don”t come back to her and feel what a woman must feel when she leaves that no good heart breaking man. An old Caddy drives through my thoughts. A song plays on the radio. You”re no good, heartbreaka, but I ain’t never, Never, loved a man the way I love you. The song fades out as the ”63 glides by giving it”s own example of the Doppler effect. The song reminds me of a girl, but I”m not sure if it applies. I feel an itch in my mind”s heart and wonder if my senses are lying to me, if I really still love her or if my desire to love is just looking for a target. Looking for a victim. I fell that I may be romantically insane, at least temporarily. There”s now a man at my nickel Jezebel. He wears tight wranglers and cowboy boots. I wonder why. I yawn silently. I”ll be here all night. I decide to explore. The moving sidewalks remind me of a friend”s insane and beautiful idea to solve Manhattan”s traffic problems. To get rid of all the cars, taxis, trucks, etc. and allow only Larks. There would be a Lark expressway that would move like a moving sidewalk. It would shoot you across town. I feel some change in my pocket. I think of change and it scares me, not quarters and nickels but the change in my life. The flux and transition that is touring my days. It seems to hold a long term contract. I think of anemia and it makes me tired. I have iron deficiency. I take supplements and still the same. I picture my doctor scratching his head. I notice he is bald were he scratches. I feel confused. Never a simple answer. I”m fading now. Behind me, a wife asks, Do you want your bagel? A husband answers, I”ll have it later. She replies, I”ll put some nice jelly on it. Half awake, half dreaming about friendly grape jelly I lay on a vinyl bench. I smile as the grape guy from Fruit of the Looms stands on a stage in my thoughts looking lost. Old clips from Grape Ape cartoons play, silently. I fade out to black, in a waiting area, in an airport. Las Vegas no doubt. 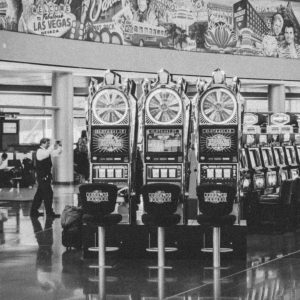