Story and photography by: Biagio Black

Dead before eighteen years of age. In the woods, held down in the lake. For a narrow moment, the involuntary panic of drowning pauses, Rusulka takes in the beauty of the sky through the thin membrane of water that separates her from salvation. The liquid bends the rare beams of sunlight that break through the gray sky domed with mammatus clouds. Colors dance around in the periphery. Her eyes staring up piercing electric blue. Time slows down as in a dream. This reprieve has its own rules and elastic time. Rusulka experiences acceptance and peace. A joyful sadness moves through her body calming her limbs. Her thrashing stops. 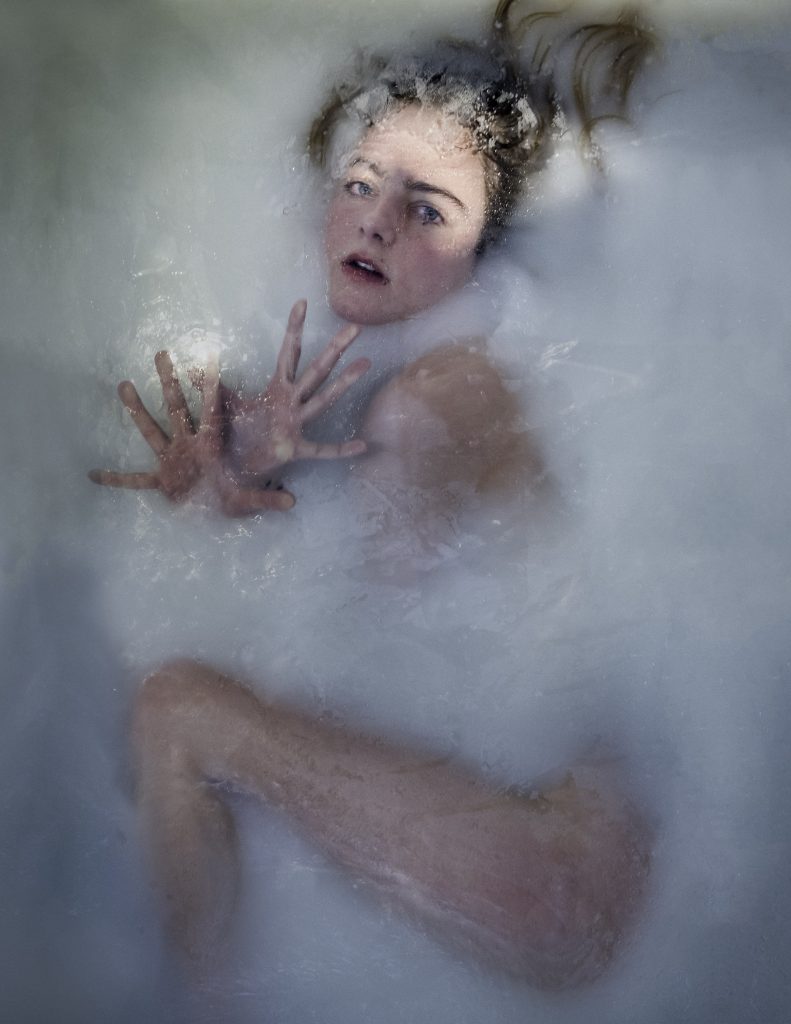 Rusulka is pulled back out of this slumber and panic overcomes her as if it had never left. There is not the tender rapture at the very end when freezing to death. This is a cruel end. She struggles. The water seems to be invaded by black ink swirling until there is nothing else but darkness. 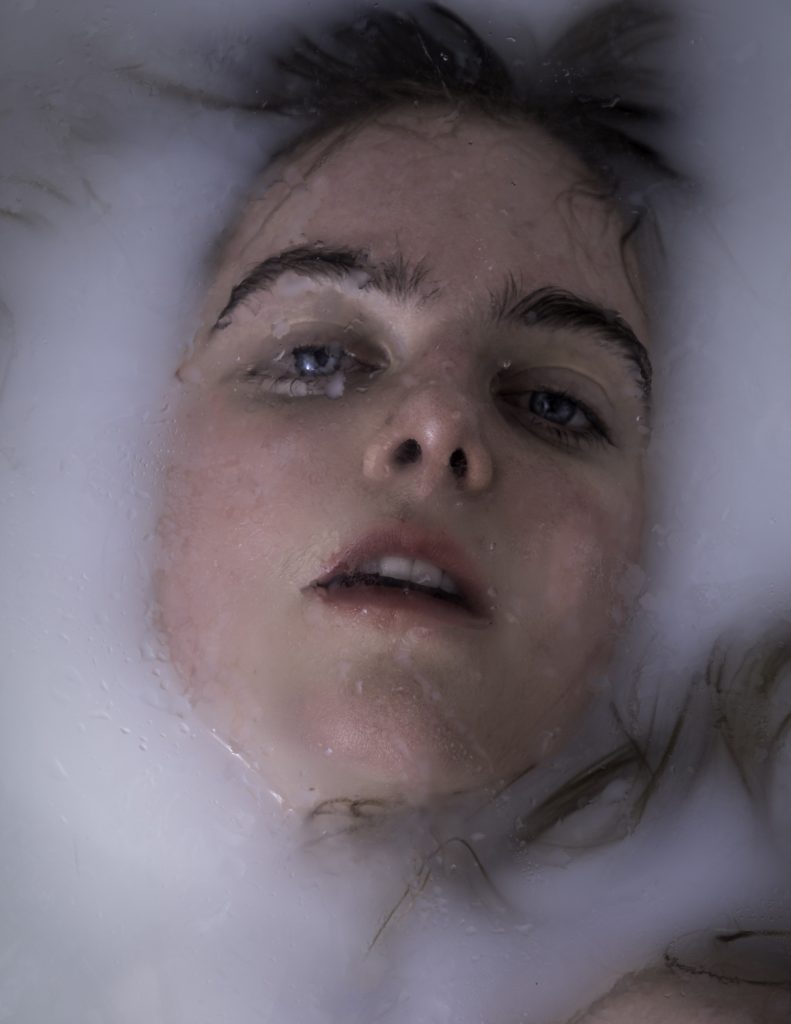 She awakens in a place that is in-between. What one imagines it must be like to regain consciousness after death before our placement is decided by higher beings. Yet no form of psychopomp comes for her. There is no Pekla. She floats here in this fluidity of perception and being. The harsh reality that was waking life has faded, drawn into the fog and out of grasp. 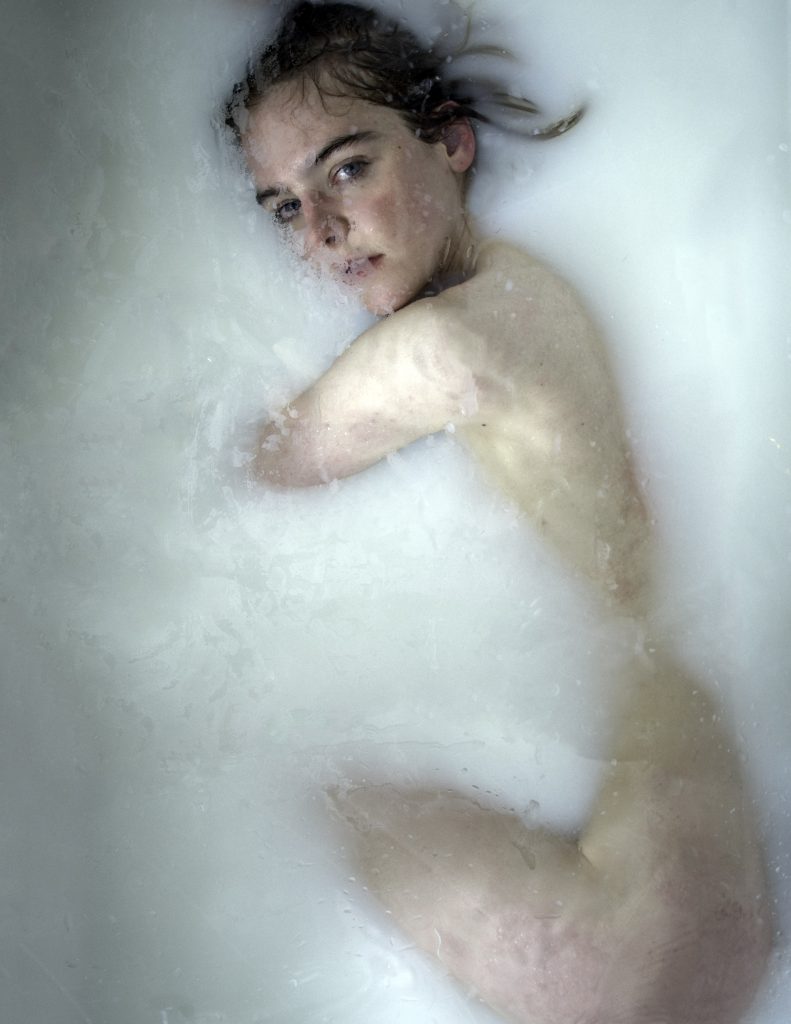 It was Sarogu that dragged Rusulka through the woods to her violent death. She was a virgin, a kind and loyal soul filled with wonderment, and too young to comprehend his cruel and weak nature. He coveted her from her youth claiming her innocence as his alone. With insidious charm and gifts that soon became ridicule and brutish control, he imprisoned her in luxury and fear. As Rusulka approached womanhood her beauty was impossible to hide from the world. Sarogu’s jealous fear became rage. He was obsessed with losing possession of her. Before she could dishonor him he held her down in the shallow water at the lake’s edge. 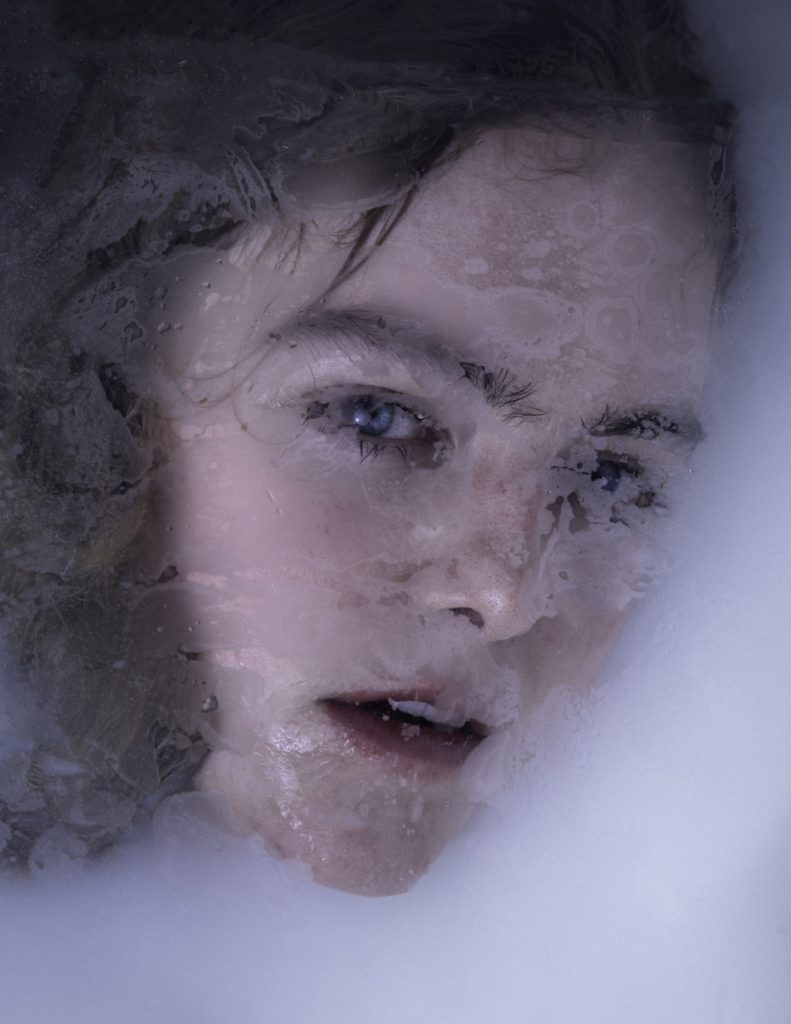 She finds herself in the cool damp woods. Her white cotton gown is damp and clings to her thin girlish frame. Fog hangs in the air padding the emptiness between the dull green spruce pines. She steps on their fallen needles turned brown, wet with dew. They prick at her feet. Everywhere looks the same as Rusulka walks instinctually trying to find her way home. Rusulka has the creeping feeling she is returning to where she found herself and fears discovering her own footsteps. She looks behind and sees the dead needles spring back with every step leaving no trace. Her world feels narrow, a labyrinth with no way out. This place is too simple. There are only the trees, the gray sky, fog, and needle floor. She senses a slight slope and turns to follow it down. Firs thin out and the shimmer of the lake surface appears through the trees. The water is flat and placid. She stands on its edge with her feet depressing slightly into the mud. Rusulka looks down expressionless with piercing blue eyes. Sadness takes over as the lake mirrors her state. Her dreams, her life, rest deep at the bottom. There they lay preserved in the cold, forgotten in the darkness. She walks slowly into the water making no disturbance. Her long hair is the last to be seen as it slides across the brim. She sinks into the cold water and submits to its embrace. This is now her home. Rusulka’s arms fall back and she floats up just below the still surface. She stares again through the thin layer of water. In this weightlessness, it seems as if Rusulka might be looking down upon the mammatus clouds that encase the sky sealing the horizon in every direction. She waits as seasons pass. The clouds move at impossible speed. Occasional beams of sunlight break through in the spring as flowers bloom and when the dark and snow falls they die. 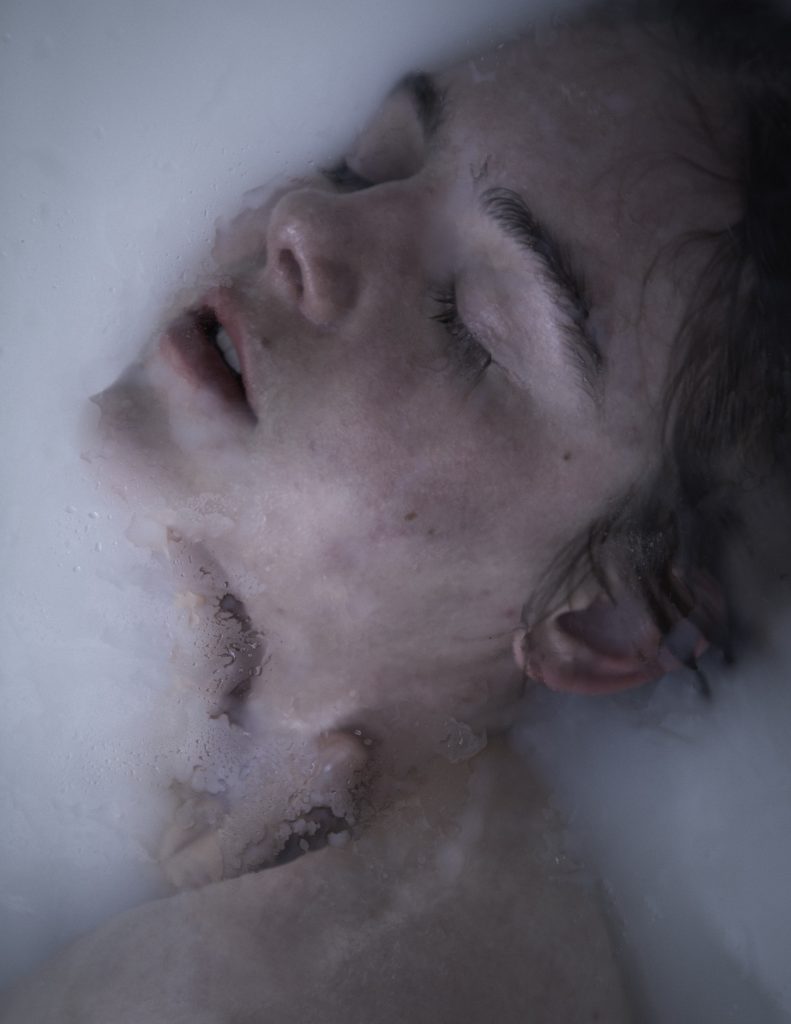 Nothing changes in this repetition of seasons until Sarogu appears at the lake’s edge and time eases. His presence awakens her. He is worn and fatter filled with self-serving regret. His face cruel and arrogant as ever. His violence is the one memory that remains clear to Rusulka where everything else is indistinguishable between dream and reality. She has relived his cruelty from their first encounter to her end. She stares at him from the shallows with electric blue eyes. Sarogu is drawn to what appears as glistening gems. He impulsively wades out to claim them. His movement unsettles the water obscuring what is in front of him. Rusulka’s long dark hair surrounds his feet tickling them as if grass. Swiftly the stands tighten around his ankles and bind them together. With overwhelming force, he is dragged out into the depths and pulled down. He grasps at his feet towards the blue eyes down in the darkness. His hands slip. No peace comes to him. No joyful sadness and acceptance. He is too feeble to escape his fate. She floats up to him to gaze into his eyes. Rusulka places both hands on the sides of his face and comes close as if to kiss him. She smiles, and Sarogu feels faith in mercy and salvation. Rusulka watches as fear leaves his eyes and his body stops fighting. In his last desperate hopeful moment, she places her hands on the top of his head and plunges him down into the deep. The force sends her breaking through the still plane of the lake. She breathes deeply as if for the first time. 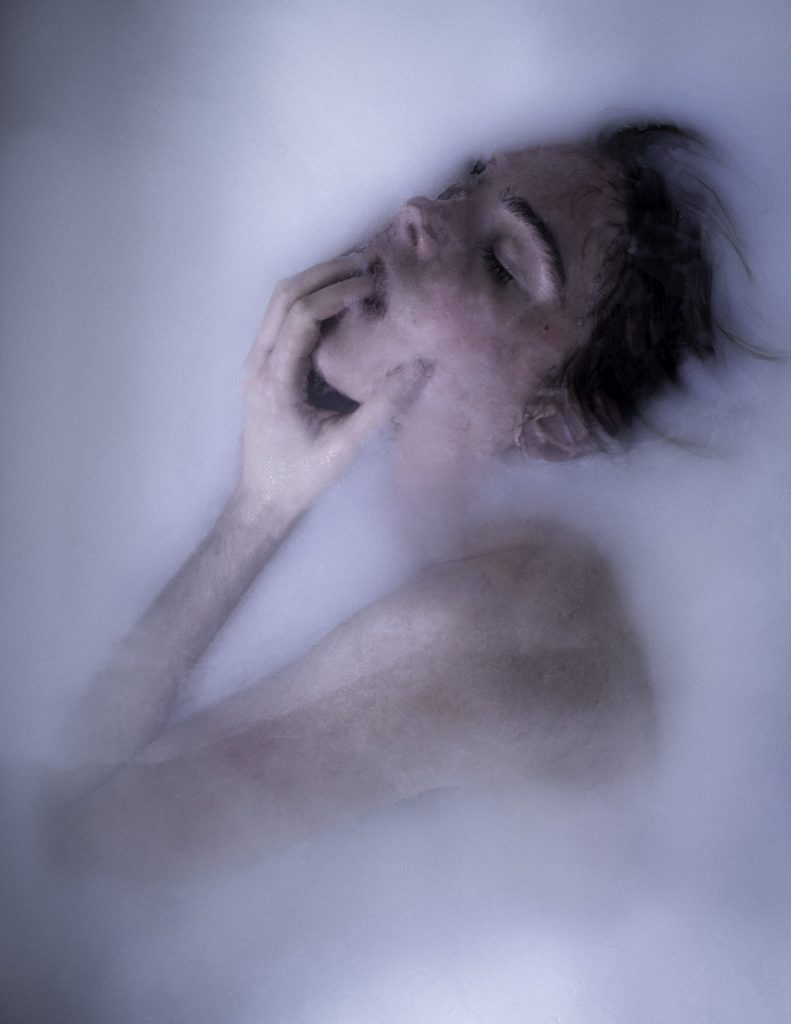 Emerging from the water’s edge, Rusulka walks into the glistening spruce pines never to be seen again.